Grew up on an island in the Mississippi River, Sabula, Iowa, which is Iowa’s only island city.

Growing up, Clark worked for a marina in Sabula, then later as a commercial fisherman.  Clark also worked for the Milwaukee Road Railroad while he was a student at the University of Iowa in Iowa City, Iowa.  He majored in psychology. Clark worked on the railroad until starting law school at William Mitchell in St Paul, Minnesota.  These life experiences and hard work helped shape the way Clark approaches his practice and help him find practical solutions for his clients.

Clark started in the private practice of law in Cambridge immediately following his admission to the bar, in April 1979, and has been engaged in general practice here in Cambridge ever since.  Clark is certified as a Real Property Law Specialist.  In addition to real estate, he does criminal law, estate planning and probate, municipal law, business law and general litigation.  Clark is the City Attorney for Isanti, Minnesota.  He is admitted to practice in Minnesota Courts and the U.S. Federal District Court for the District of Minnesota.

Clark is a member of the Minnesota State Bar Association, Real Property Section, the Cambridge & Isanti Rotary Club, Cambridge Lutheran Church, and Isanti County Historical Society and serves as a board member on a number of organizations. 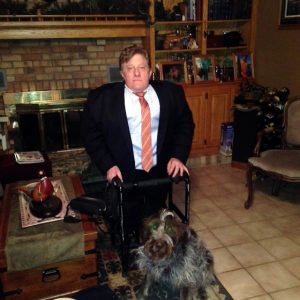 Patrick B. Moore graduated from the University of Iowa College of Law in 1994 and got his first job in the tax department of a national certified public accounting firm in Minneapolis. After working for two large CPA firms in various tax areas ranging from individual taxation to non-profit tax, Pat specialized in international tax. He then went to work in house for a Fortune 500 company in St Paul and handled the ongoing IRS international tax audit work. Pat is a Certified Public Accountant since 1994, but has allowed his CPA license to go inactive now that he practices law full time.

Pat joined the law firm of Clark A. Joslin Law Offices P.A. in the fall of 2005 to broaden his legal practice areas beyond taxation and audit work. Since then he has become a partner in the current firm of Joslin & Moore Law Offices, P.A.

Currently, Pat practices in a number of areas ranging from criminal defense to civil litigation and personal injury work. Pat also was a real estate investor for a number of years owning rental property in Brooklyn Park, Minnesota. In his 19 years of practice, Pat has represented both large corporate clients and individuals in countless transactions and litigation matters. He has settled large lawsuits and audits involving over $2,000,000.

Pat and his wife live in the country south of Cambridge with their two German Wirehair Pointers and enjoy taking part in community projects and fundraisers.